I placed Adik onto the walker and gave her a ball to play with. I took a copy of newspaper and sat by the door. Adik was sitting near the shoe rack.

Suddenly I heard she screamed and cried. Before I could glance at her, I heard Kakak said; "cat!". No it wasn't a cat, it was a MONKEY!

I grabbed her and tried to scare away the monkey. He stepped back but didn't run. I handed Adik to Abang and throw a shoe to him. He backed off but still sitting on the fence. I took a cloth hanger and threw it to him. Yes! It hit him and he ran away. I checked on Adik's head, face and hands and alhamdulillah everything was OK. She also stopped crying.

However, not long after Abang noticed there were few scratchers on her chest. My heart stopped! 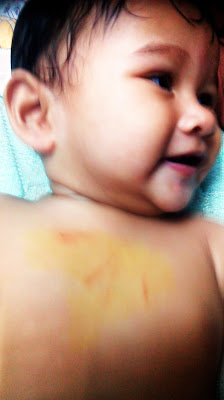 The monkey has attacked Adik. He tried to grab the ball I guessed. He might thought the ball which Adik was holding was a fruit, judging from the color, orange.

We then discovered another wound on Adik's back. This one was worse. About 4-inch cut. I couldn't bring myself to imagine how she got the cut. The monkey possibly jumped onto her back. It was horrible!

This monkey has been roaming in our neighborhood for months. We usually see him on the trees, roof and sometimes on our neighbors' verandah. He never come to our porch before. I am thinking of reporting the case to the authority to prevent another untoward incidents in the future.

We must be extra careful next time. 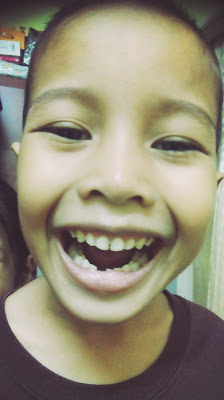 I was in the kitchen. Suddenly Angah came;

It was on Tuesday.

On Thursday, once he stepped out of the school van, he ran towards me and happily announced;
"Umi! Gigi Angah dah cabut!"
Cikgu Lin cabutkan! 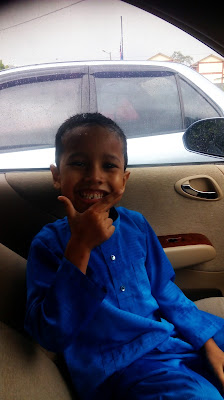 Email ThisBlogThis!Share to TwitterShare to FacebookShare to Pinterest
Labels: Angah 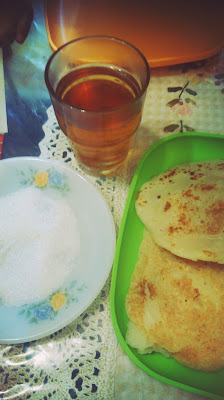 Why peknga or tepek? Because peknga means tepek atas belanga :p
I think it refers to the way it is prepared. We just simply tepek the batter on the pan and let it cook.

My mother, Mak usually cooked this for our breakfast or tea, when I was young. It requires a simple ingredients; wheat flour, salt and water. Mix them well. And you are done with the batter.

Most of the time, we ate tepek with sugar.  However, I like it the most when we had leftover fish curry because we can eat with tepek.  Unfortunately it was not so often. Very few occasions that we ate tepek with condensed milk. It was a luxury item for us during that time. My father, Pak would only bought condensed milk during bulan puasa and hari raya.

Now I am happy to share this memory with my children. They enjoy eating tepek and I am very grateful to be able to provide them with something considered luxury for me during my childhood. Alhamdulillah. 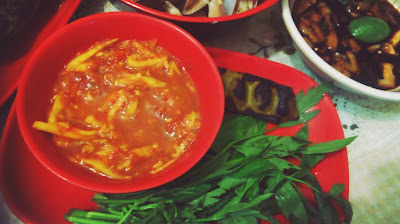 I went to my regular shopping spot, a wet market today. I spotted a couple selling buah kuini in front of the market entrance. I walked pass them and went directly to the chicken stall. Make order then proceed to buy fish.

Last week I got the same question from adik jual ayam and I gave almost the same answer to him. I have been absent from the market since my 3rd trimester and only make a 'comeback' recently. Nadeen is now almost 8 months. Definitely they missed me because usually spend more than my hubby haha...

I love going to the market on my own because 1) I don't have to prepare the shopping list, which is considered tedious.  Everything needed dalam kepala je. 2) it is shopping! Even buying groceries is considered shopping for me. Shopping kan terapi bagi orang pompuan :p
jangan ingat surirumah tak stress ye...

Done with that, I stopped at the car where the pakcik makcik sell buah kuini. I bought two. Price per kg is rm8. Wow! Very pricey right? 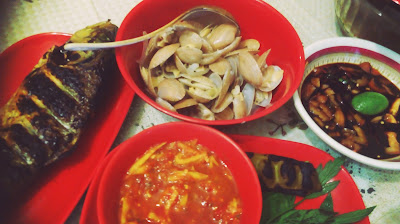 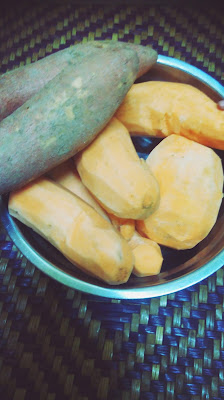 I like keledek very much, whether it is pengat, keledek goreng or rebus. Sometimes we put it in masak lemak pucuk manis. Tambah pulak udang memang sedap.

During my childhood we always consumed keledek kuning/putih, which we grew on our own. We called them ubi ketela. On the other hand, potato is called ubi gemala, my other favorite. 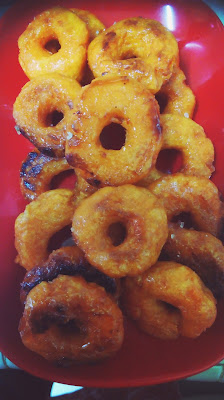 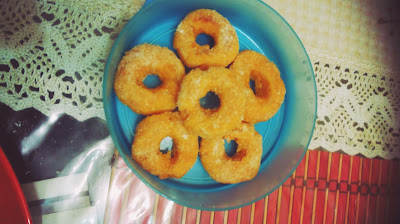 I had my first bite of keledek oren when my primary schoolmate, Nora offered me to try. It was sweeter, more tender and better than keledek putih/kuning. I wish I could have more. However I never asked from my parents to buy keledek oren because I was afraid that they have to fork out more money just to satisfy my wish. I assumed that keledek oren must be pricey because it tastes better than keledek putih/kuning. Meanwhile, keledek ungu was beyond imagination at that time. 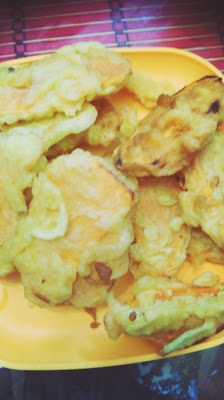 Keledek goreng or cucur ubi, my all time favorite.

Will try to make cucur badak next time when I buy keledek. Favorite jugak tu :)

I promised to bring her to a saloon to get her hair cut. And she was so exited with the idea. However we didn't manage to materialize the idea. Poor Kakak :(

Every time I comb her hair, I told her we should cut the ekor rambut as they started to become dry and kusam. After so much delay, we managed to cut her hair. While she was ready, me on the other hand feel reluctant to do so. Tetiba rasa sayang pulak dgn rambut tu. But I soldiered on.

I was both proud and sad. Proud because I am able to cut my daughter's hair (what an achievement hahaha ) and was the first barber of her life :p However I was also sad at the same time, losing such a beautiful curl on her hair. But it will grow again, never mind. By the way, it was only 2-inch length. Overlah Umi ni :) 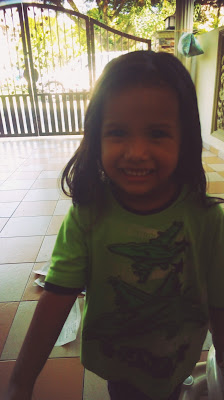 Email ThisBlogThis!Share to TwitterShare to FacebookShare to Pinterest
Labels: Kakak

Adik is down with flu and fever. As a result she becomes too clingy. She wants me to be by her side all the time. Whenever I am out of her sight she would cry. And cry loudly!

We were having dinner last night so I put her in the walker. She refused but had to do so because I want to break my fast. After such a long cry suddenly it was a total silent. I looked at her and saw this; 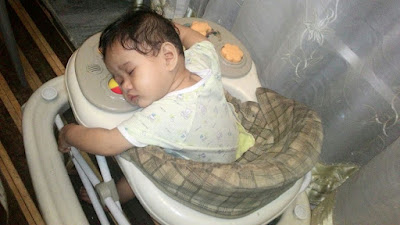 Few days ago, my friend Cikbi shared with us a money saving chart. I think it is very useful and cool too.


I have to skip these two because this is not viable for us. Most of our weekly budget goes to grocery shopping. Ngam-ngam je. It seems OK for the earlier weeks but later on the amount need to be saved becomes bigger. We might have to get extra fund, which might affect other expenses. So forget about them :)

Meanwhile, I like to try the following methods.
Though we are required to save a big amount of money but it is on monthly basis, which is easier and viable for us. Look at the total saving the we will have at the end of the year. Enticing!

I like this one very much. Every time you get green note (rm5) or orange note (rm20) keep it in your tabung. However rm20 is a big money for me. So I substitute with gold coins. Lets make it fun while saving okeh.

Though this is meant for kids, but I want to try also. I have briefed Abang about this challenge and he seems to understand. To encourage him, I will do it too. We will see at the end of the year who has more saving. Another method that I will try is to save rm1 per day. I have done this before it was successful.

Undoubtedly we need discipline in doing this. Can't wait to see the result, in another 363 days insha Allah.

To get a clearer idea, please read this.
Good luck!